I try a lot of mascaras but I rarely review them. I have pretty good natural lashes so a mascara that’s half decent will generally still look okay on me, and I can’t always see much difference between one mascara and another if they’re both good.

That said, finding an affordable mascara that does what I want to is always something I’m on the lookout for, so I’m excited to review the Collection Lash Surge Mascara for you today. 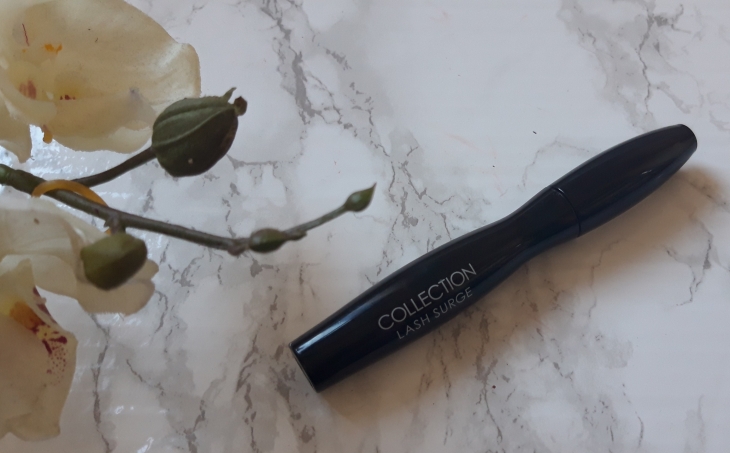 This comes in a standard black plastic tube with a slight curve and rounded lid. It’s a little bit bigger than other mascaras but it’s but it’s functional and I quite like the simple curved shape of it, making it easy to hold.

The wand is long and slightly tapered at the end with synthetic bristles.

This retails for £4.99 in the UK and can be found even cheaper (I think it was £3.99 on offer when I bought it). As far as drugstore mascara pricing goes, that’s definitely on the cheaper end of the scale.

I accidentally picked this up in the shade Black Brown and didn’t notice until I opened the tube and saw the brown tinge.  At first, I was all ‘Who the hell even wears brown mascara??’ but I have to say, it doesn’t really look much different to other mascaras when it’s applied. It’s a little more subtle looking if that makes sense but I think that’s just because it’s less intense in colour.

The formula is quite gloopy and I usually wipe excess product off the brush just to avoid getting it all over my face. It applies nicely on my lashes and is quite volumising in that clumpy lash sort of way that I enjoy but it doesn’t really add much length on me.

What I will say about it is that it pairs really nicely with other mascaras so I have been using this mostly as a base coat and topping it with something else for maximum effect.

This lasts all day on me with minimal flaking, hold a curl and is super easy to remove, which is one of the things I really like about it.

Overall, I think the Collection Lash Surge Mascara is a great budget option. I probably won’t go out of my way to repurchase this once it runs out but I would be interested in picking up the black version and I would definitely recommend if you’re in need of a cheap mascara and don’t mind a bit of clump.