My empties pile has well exceeded the ten items cut off point so I thought it was time to get this up as the next part will be on its way at the rate I’m finishing up products at the moment. 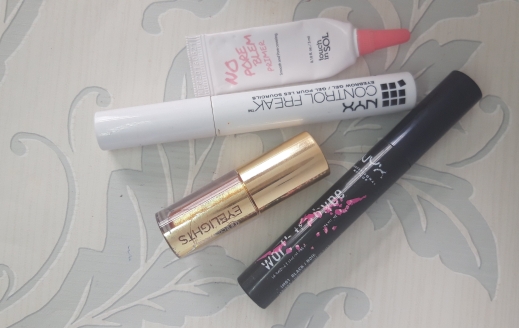 NYX Worth the Hype Mascara

This has been a well-loved mascara that’s now reached that stage of drying up where it’s difficult to use. I wasn’t a big fan of this when I first opened it but it soon became a favourite for fluttery, separated lashes.

Repurchase? Yes after I’ve got through some mascaras

There’s probably still some product left in here but the applicator won’t quite reach it which is annoying. These liquid eyeshadows are so underrated IMO and this was my fave shade, though I don’t think you get tons of product in here.

I’ve given up on this due to how long I’ve had it now and it’s gone all gunky and yuck. I never use clear brow gel unless I need an extra layer of setting so this was mostly unloved in my collection and I don’t think it did anything better than a cheap clear mascara does.

Touch in Sol No Poreblem Primer

I enjoyed this sample primer more than I thought I would. It’s a silicone pore-filling primer that I’m not usually a fan of but this one felt a lot more moisturising and less silicone-y than others I’ve tried. I don’t need another primer for about 15 years looking at my current collection but I would buy the full size if I ever need to.

This has been my go-to makeup removing cleanser for a while now. To me, it’s just as good as the pricier options but I don’t think it’s available anymore.

Repurchase? Can’t but would

I made an effort to finish this up after buying the Revolution Niacinamide spray and realising this actually has pretty similar ingredients. It was nice to use as a skincare item on bare skin but it could make my face a little tacky feeling.

I’ve really liked all the mini  Laneige things I’ve tried so far and this gel-based night cream is really nice because it sinks into the skin so fast and leaves me feeling hydrated without that greasy, heavy feeling.

The version I have says it’s an M&S exclusive since I got it in their advent calendar but it looks to be available elsewhere in different packaging. I was using this on an evening when I ran out of my Laneige Lip Sleeping Mask but now I have that back in my collection, I think this was pretty average as a lip balm.

This was in my review of the vitamin C skincare range recently so I won’t go into too much detail but bubble sheet masks are fun and I liked this one.

If you’ve seen my previous empties, you’ll know this is a staple product for me and the only thing that works for my scalp.

To be fair, this still applies my makeup fine but I’ve had it for well over a year now and it’s gross and I have plenty of makeup sponges.

Repurchase? Probably not- I love it but it’s so expensive for what it is

Expect the next part soon!